Unhealthy lifestyle and bad eating habit leads to hyperuricemia, which is abnormally elevated level of uric acid in our bloodstream. Hyperuricemia exponentially increases the chances of developing chronic gouty arthritis. Not only gout but also high level of uric acid in the bloodstream has been associated with diabetes, metabolic syndrome, renal disease and cardiovascular diseases.  The excess uric acid ends up in the joints of hands and feet as crystals. The sharp edges of the crystals press on soft tissues causing, pain, swelling and inflammation. But uric acid problem is curable and if you are suffering from uric acid and wondering about how to cure uric acid permanently, then here’s the post worth checking. Today I am going to discuss about everything worth knowing about uric acid, including the foods that’ll help you to cure uric acid permanently. 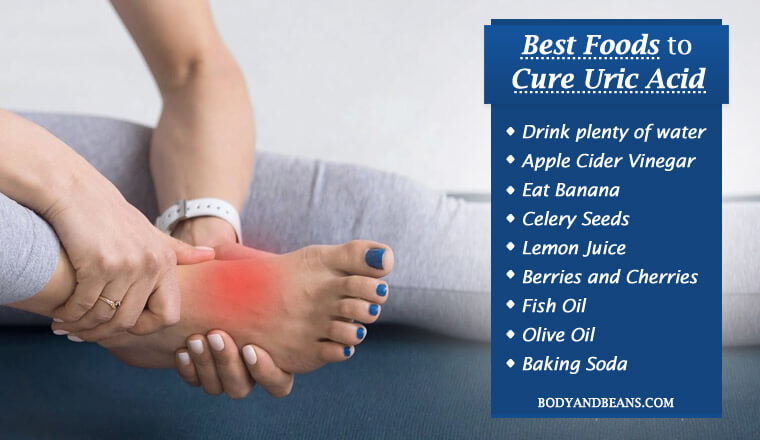 Uric acid is formed due to the purine metabolism in humans, breaking down protein during digestion. When the level of uric acid in the bloodstream becomes elevated, we experience gout. Paltry amounts of sodium salt of uric acid, precipitated in bones and cartilages, are the reason behind gout.

Surprisingly, 90% of the uric acid filtered by kidneys is reabsorbed by our bodies, instead of being flushed out. This suggests that evolution might have other plans for uric acid as our bodies keep storing it instead of discarding it off like a harmful waste product.

Some scientists put forward the theory that the loss of uricase activity, which leads to uric acid being stored, could be beneficial to regulate blood pressure when very low salt is ingested. Some researchers also say that uric acid has protective effects against numerous neurodegenerative diseases, hinting at the fact that uric acid might have a relationship with neural development.

However, we are talking here about the negative effects of uric acid storage in our bodies. When you notice symptoms of gout, tell your doctor about it as soon as possible. Also, remember to mention if you have a history of heart or kidney diseases or diabetes. Medication is inevitable in case of uric acid increase. But there are certain home remedies to cure uric acid that you can try to manage the level of uric acid.

Uric acid is a natural waste product in our body. Eating foods which is high in purine (a type of protein) can increase the uric acid levels. So it’s more about the lifestyle and food habits, when you eat right, you can manage the level of uric acid in your body.

Apart from eating healthy and nutritious foods that has low purine contents, you should drink plenty of water to ensure the bad uric acid is flushed out naturally. Eating right is seriously important to remain fit and healthy. Listed below are a few of the best foods that’ll help you to cure uric acid fast and easily.

To get rid of uric acid, you should drink at least 3 liters of water per day. Water dilutes the uric acid crystals and flushes it out of our system. Drinking water does not affect the amount of uric acid produced due to our metabolism, but it certainly helps in flushing out the unwanted uric acid from our body. If you want to stay fit and cure uric acid problem, you should develop the habit of drinking plenty of water every day.

If you are exercising, remember to drink more water after workouts because that is when your bodies lose water and the concentration of acid in your bodies goes up. Similarly, when you are going out, drink plenty of water to keep yourself hydrated. Water is not only good for curing uric acid issue, but it’s also good for your internal health, including skin and hair.

Apple cider vinegar is rich in nutrients such as Potassium, which helps to flush out excess calcium, amino acids, iron that lower toxin accumulation and serve as an antibiotic. The main component of apple cider vinegar, which helps in treating gout, is acetic acid. Inside our body, acetic acid is converted into an alkali, which balances the normal pH level of our body, thus preventing gout.

Apple cider vinegar breaks up the crystals of uric acid and averts them from reforming in our joints. By doing this, it aids in bringing down the swelling and inflammation and enhances mobility in the joints of our hands and feet. Consuming apple cider vinegar is considered more beneficial than eating an apple because apple cider vinegar contains more malic acid than an apple.

To treat your gout you need to take two to three teaspoons of apple cider vinegar thrice daily. You can take it raw or mix it in a glass of water, according to your preference.

Banana is one of the best natural sources of potassium, containing 400mgs of potassium with each gram of sodium. Bananas help you maintain your regular blood pressure, cardiovascular functions and bring down uric acid level in the bloodstream.

Bananas convert the uric acid into liquid state so that it can be filtered through the kidneys easily avoiding the crystallization. No crystals formed, means no joint pain from swelling and inflammation.

Bananas also contain Folate or folic acid, which too lowers uric acid level and repairs broken tissues in the joints. Moreover, bananas are alkaline in nature, which removes acidic environment in our body and does not allow uric acid to form. Remember to eat at least one banana per day to keep away the gout attacks. You can eat it as it is or add it in your cereals and oatmeals.

Celery seeds had been used in ayurvedic treatments for cold and flu, arthritis, poor digestion, bloating and to cure many other health disorders. Using celery as a remedy for common health issues is not very prevalent in the West as it is in the East.

Omega-6 fatty acids rich celery seeds act as a powerful diuretic that purifies our system of excessive fluids and activates the kidney to discard the uric acid including the crystals of it. They enable your renal system to excrete uric acid more efficiently, while alkalizing your blood.

Celery seeds get rid of the excess water and increases urine output in the process. You can take naturally dried celery seeds but they are bitter and hard to swallow.

Lemon juice stimulates the liver and activates the formation of calcium carbonate, which alkalizes the urine, makes your internal environment less acidic and neutralizes uric acid. Drink the lemon juice of one whole lemon in a glass of water after meals to prevent gout attacks. You can also drink it first thing in the morning on an empty stomach. Adding lemon juice to your green tea is also an effective way to reduce uric acid level in your body.

Raspberries fight gout inflammation like ibuprofen or aspirin does. They shut off signals from COX-1s and COX-2s enzymes, which are responsible for inflammatory response of our body. The anti-oxidants found in raspberries are quercetin, ellagic acid and carotenoids, which are further helpful in bringing down the elevated levels of uric acid in our system.

As mentioned before Potassium is very useful against uric acid. 123gms of fresh raspberries contain 186mg of Potassium, which is 5% of our daily requirement of potassium. Drinking raspberry tea will help you to get rid of uric acid and prevent the onset of gout attacks.

As per this research, 633 individuals who were treated with black cherry extract over a period of two days showed 35% reduced risk of gout attacks. When the cherry juice was paired with allopurinol, a known prescribed medication for kidney stones and gout, the risk of gout attacks were reduced by 75%. Black cherry juice lowers inflammation and prevents uric acid buildup quite effectively.

Fish oil does decrease the risk of gout but at a slower rate. It is packed with omega-3 fatty acids that lower disease-causing inflammation in your body. According to this report, fish oil has been proven as an effective treatment against arthritis and benefits people with gout.

Normal cooking oils strips Vitamin E from our bodies. However, cold-pressed olive oil is rich in Vitamin E and mono-saturated fatty acids that supply the necessary amount of Vitamin E that reduces the level of uric acid in our body. Switch your usual vegetable oils with olive oil and you will notice a marked decrease in symptoms of excess uric acid.

Add half spoon of baking soda to a glass of water and take this solution four times per day. Make sure you drink it once before you go to bed since it is common knowledge that our body remains acidic during the nighttime. If one quarter of a spoon of baking soda works for you instead of one-half, then lower your dosage. The less baking soda you take the better. This is because baking soda is extremely high in sodium that is not good for you.

Baking soda increases the pH level of our blood and body fluids, which makes it easier for uric acid to be soluble. This in turn makes it easier for the kidneys to flush it out and restore the normal alkaline balance of our body. Alkalizing your blood means alkalizing your urine, which makes excretion of uric acid a shade easier. There is a slight chance of baking soda not working for you since the internal structure of bodies are not similar. You may consult your physician if you experience side effects from using baking soda as a remedy for uric acid.

Uric acid is automatically produced by our body, when we eat foods which are high in purine (a type of protein). The level of uric acid can be reduced by eating certain types of foods. Drinking plenty of water and eating uric acid friendly foods like berries, celery seeds, nettles, lemon juice, fish oil, black cherry juice, banana and apple cider vinegar etc can help you to cure uric acid permanently. These are the proven household remedies to treat uric acid.

Increased water intake is the simplest and one of the most effective ways to cure uric acid problem. A well-hydrated body means, lessened uric acid level in the blood. To increase your water intake you can switch your regular water with lemon water, coconut water or even green tea.

Bananas are high fiber foods that absorb uric acid from the blood and eliminate it through the kidneys. Vitamin C and Vitamin E are very beneficial for lowering uric acid level in our system so include foods like lemon, oranges etc. to prevent uric acid accumulation.

Since uric acid is formed by the breakdown of purine nucleotides because of faulty protein metabolism, to avoid uric acid risk, you should stay off of high-purine foods like red meat, mushrooms and foods containing yeast.

Try to maintain your diet and avoid sugary drinks and saturated fats as much as possible. Take light and easily digestible foods like boiled vegetables or veggie broth. Light exercise will also help in keeping your joints flexible. You can also massage your joints with hot oil like, sesame oil, to keep away the joint pain.

Are you suffering from uric acid? Which remedies or foods have worked wonder for you? Feel free to share the remedies and foods to cure uric acid permanently.

Until then stay fit and healthy!

Eliana the chief editor at bodyandbeans is a professional yoga instructor and a fitness freak. She has done her master’s in history from Kolkata University. She is passionate about healthy eating and living practices.

Eliana the chief editor at bodyandbeans is a professional yoga instructor and a fitness freak. She has done her master’s in history from Kolkata University. She is passionate about healthy eating and living practices.
View all posts by Babi Ghosh →