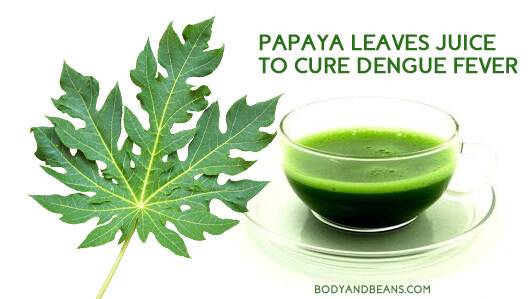 According to WHO, “An estimated 500 000 people with severe dengue require hospitalization each year, a large proportion of whom are children. About 2.5% of those affected die.” In 2014, the number of dengue cases stood at 10,097 and increasing.

There is no specific medicine for the dengue fever and normal paracetamol and liquid diet is advised by the doctors. But in ancient times, when there was hardly any technological and medical advancements, people took help of the natural resources, the fruits, vegetables, herbs and plants to cure various types of fever. Following the doctrines of Ayurveda, we have come to know that the papaya leaves juice help in curing Dengue, and there is evidential proof available.

According to this report, Taking papaya leaves juice for 5 consecutive days, actually increased the blood Platelets count (PLT), White Blood Cells (WBC) and Neutrophils (NEUT). And the same report concludes that the papaya leaf extracts shows potential activity against the dengue fever. Same report also concluded that different parts of papaya can actually be used to fight against other viral diseases.

What is Dengue fever and how is it caused?

Dengue is a mosquito borne disease which is a flu-like illness; about half of the world’s total population is at risk of having dengue. Dengue is caused from mosquito bites, and is prevalent in tropical and sub-tropical countries, like India, Latin-America, Malayasia, China etc. According to WHO, Dengue virus is transmitted by female mosquitoes mainly of the species Aedes aegypti and, to a lesser extent, Ae. albopictus. This mosquito also transmits chikungunya, yellow fever and Zika infection. Dengue mosquitoes are present in urban and semi urban areas, round the globe.

What are the symptoms of Dengue fever?

The patients suffering from Dengue will have 104 degree F temperature, nausea, joint pain, muscle pain, and sever pain behind the eyes, vomiting, swollen glands and rashes on the body, severe abdominal pain, rapid breathing, bleeding gums, fatigue, restlessness and blood in vomit. It is important to have proper medical treatments to avoid further complications and risk of death.

Dr Nam Dang, at the University of Florida found out that the papaya leaves are non toxic, can fight cancer, improves one’s immunity, and that it has the curative capacities in diseases like malaria and dengue. Dr Sanath Hettige, a Sri Lankan physician presented a paper in Sri Lankan Journal of Family Physicians where he stated that the papaya leaves juice can cure dengue.

Dr Hettige found out that the papaya leaves are rich in chymopapin and papain helps in increasing the platelet counts, normalizing the clotting process in the body, repairing the damage caused to the liver due to the liver, and thus improving the liver functions primarily. This enables the dengue patient to recover stably from the fatal disease.

Best time to have papaya leaves juice for a dengue patient

Doctors suggest to start having the juice with the onset of the early symptoms of the Dengue fever. When the platelets count below 150000 cu mm or when the packed cell volume goes above 10%, then it is time to start having the juice. But, if the organ failure has started, then the papaya leaf juice will not be effective. So, it is important to start the remedy as early as possible.

How to prepare juice from papaya leaves?

Make sure that the leaves which you are using are young, but neither too young nor too old. The leaves of Red Lady papaya are most effective in curing dengue fevers. Take only the leafy part, and throw away the stem.

Wash the leaves very thoroughly, if possible in lukewarm water. Boil the water, then cool it a bit, wash well, and then make a paste. You can make it a paste with a wooden pestle, but do not add any additives, like sugar, salt or water to it.

It is possible to treat and cure dengue, but the steps have to be taken from early stages itself. If you are having high fever, then you must visit the doctor as soon as possible. If it is a normal common cold, then it is ok, but if its dengue, then it needs special attention.

The symptoms of dengue can be similar to other diseases, and hence you should consult to a physician and do required tests and follow the medicines prescribed by them.