Diabetes is a chronic illness that is becoming very common nowadays due to the unhealthy diet and the sedentary lifestyle. The diabetes is a disorder where the levels of carbohydrates, sugar, fat, and protein increases. Diabetes can affect the various other organs of the body like the brain and the heart. But thankfully, diabetes can be controlled by eating diabetes friendly herbs and foods and by leading active lifestyle. Today in this post, we are going to discuss about some of the best herbs and foods for diabetes control. 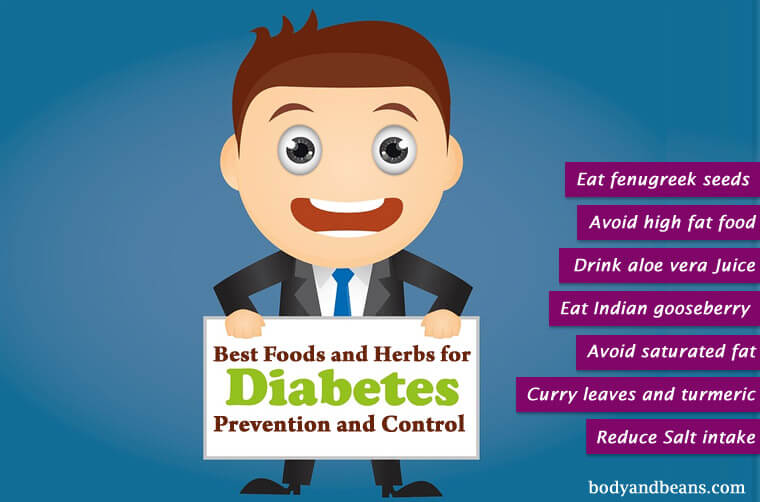 If you are suffering from diabetes, or there is any diabetic in your family, I am sure you understand their pain. Even if diabetes can be controlled, life changes completely.

World Health Organization (WHO) has pointed out that about half of all deaths of the world population are caused by the rise in the level of blood glucose before the age of 70 years. WHO also projects that in 2030, diabetes will be the 7th leading cause of deaths in the world, and that’s a real threat. Today, more than 422 million people are living with diabetes, worldwide.

Researchers have estimated that the developing countries are more prone to diabetes in the world. In India, it is estimated that 33 million people are victims of this disease, and it will increase to 58 million by the year 2025. The rate of the people suffering from diabetes is increasing rapidly, and majority of the cases are from the urban areas.

Looking at the dangerous situation of the disease, and how fast it is spreading, it is better that you take proper care of your health, before it becomes a problem. Regular checkups, controlled diet, proper body weight and regular exercise can help you to prevent or control diabetes.

Best herbs and foods for diabetes prevention and control

Diet and lifestyle affects the most. If your diet is right and you are active, chances are you won’t have diabetes. But if you are a diabetic, then you gotta eat right.

We are going to talk about the most effective diabetic friendly herbs and food that help you to keep your blood sugar level under control.

Ayurveda, the age old system of curing various types of illnesses is prevalent nowadays, and the modern world is embracing the techniques of Ayurveda on every passing day.

Here are some of the best herbs and foods for diabetes prevention and control.

Fenugreek seeds have medicinal properties that significantly reduce the blood sugar level and improve glucose tolerance. It is primarily an herb, which is used in India and other Asian countries as an ingredient in cooking.  Fenugreek seeds are very much effective in controlling diabetes.

These seeds are high in soluble fiber which can slow down the digestion and also the absorption of the carbohydrates. Studies have found out that Fenugreek seeds help in reducing the levels of glucose in the blood, and also increase metabolism of the body. Since fenugreek seeds can reduce the levels of the sugar, it is highly associated with type 1 and 2 diabetes.

The best way to eat fenugreek seeds is to soak it overnight in a glass of water and chew the seeds next morning and rink the stock. Alternatively, you may just heat the fenugreek seeds and grind it into fine powder and then take one tablespoon with water. In Indian dishes, fenugreek seeds are also used as spice like cumin seeds, so you can also use it in cooking.

If you have to choose just one herb or foods ingredient that can help in diabetes management then it has to be fenugreek seeds.

Aloe vera is that magical herb that has innumerable health benefits . It improves the hepatic-biliary system, which regulates the levels of sugar and fats in the blood. It increases the metabolism in the body and also helps in weight loss. Thus, aloe vera has a special place when it comes to controlling diabetes.

In 2003, a study was published in Diabetes Care Journal, which shows that cinnamon or Dalchini is highly beneficial for controlling the blood sugar level. It prevents heart diseases and also diabetes. Regular consumption of cinnamon will have 13-14% rise in the level of the antioxidants which will reduce the level of glucose in the blood.

Indian gooseberry or the Amla is considered to be the producer of natural insulin and hence its one of the best diabetes friendly food. You know that amla is useful for hair growth, but did you know that this herb can also prevent diabetes. Mix the amla juice with bitter gourd juice and consume it for 2 months daily. This will help the pancreas to produce more and more insulin.

Curry leaves can increase the taste of any food items, it is a very popular ingredients in many of the South Indian dishes. Consume raw curry leaves daily in the morning in empty stomach. It has medicinal properties and that’s why it is used widely across India and Srilanka.

Ginger is rich in anti-diabetic and anti-oxidative properties which increases the insulin production and also reduces the level of glucose in the blood.

In 2014, a study was published in the Complementary Therapies in Medicine Journal, where it was shown that the daily ginger intake can help to prevent and reduce the type 1 and 2 diabetes. Drink ginger tea daily and also add this herb in your cooking.

In 2014, Journal of Diabetes & Metabolic Disorders showed that turmeric helps in curing and preventing the kidney related diseases which are caused due to diabetes. You can include the turmeric powder in cooking, and also add the turmeric in milk and drink it. You can also take raw turmeric in morning daily. Raw turmeric looks somewhat like ginger, and they are bitter in taste. So, you can drink it with water.

A 2014 study published in the Journal of Diabetes & Metabolic Disorders show that garlic can treat diabetes and also cure the ill effects that may be there on other organs like kidney and heart. Garlic is helpful in preventing various cardiovascular disorders, by reducing the levels of the sugar in the blood.

Isabgol is also known as psyllium husk which is often used to cure constipation. Isabgol slows down the absorption of blood glucose and thus is helpful in treating and preventing diabetes.

Which food is bad for diabetes?

Food has a very important role, and especially if you are diabetic. Properly balanced and nutritious foods can keep you healthy and prevent various types of diseases, including diabetes.

I am sure you know that fresh vegetables, fruits and herbs can help you prevent and control diabetes.

But what are the foods which are worth avoiding if you are diabetic?

Here’s the list of some of the foods which is to be avoided by diabetics;

Avoid Foods that contains saturated fats. Foods like red meat have plenty of saturated fat and hence diabetic patients should avoid or regulate the consumption.

Foods that contain high fat should also be avoided. Most of the vegetable oil contains plenty of calories, like one gram of vegetable oil may contain up to 9 calories and 4 grams of carbohydrates. Monitoring your calories is essential and hence it is better to avoid fried snacks and other food items which are high in fat e.g. watermelon, potato, refined sugar, pineapple etc.

Salt has many essential minerals, like sodium and iodine. But excess of sodium is not good for your health and hence you should track your salt intake. Avoid sprinkling it on salad, fruits etc, and raw salt is terribly bad for your health.

What may cause diabetes?

Here are some of the primary reasons of diabetes;

Obesity and overweight are some of the primary reasons. If you have excessive body fat, this means reduced metabolism and as a result the level of insulin will be low in your blood. If you have excessive fat accumulation in your belly, then the insulin cannot be produced in your pancreas, the result will be the occurrence of diabetes.

In this condition, the liver, fat cells, muscles fail to use the insulin, therefore the demand for the insulin increases. The pancreas tries to produce more insulin, but fails to meet the increasing demand. This is why the level of the blood sugar increases.

If diabetes runs in your family, then there are high chances that you will also have diabetes. If any of the genes be it the dominant or the recessive genes carry diabetes, then there is a risk that you or the future generations will carry forward the same disease.

Too much of fatty foods like the chips, burgers, pizzas, drinks, oily and junk foods are responsible for this disorder. Too much of fats will hamper the production of insulin in the body, and the blood sugar level will increase. This is the reason you will reach many steps closer to the diabetes.

As mentioned above these are some of the main reasons of diabetes. Eating right and living an active life not only help you stay fit and healthy, it also keep your energized for rest of the day. Adopt healthy eating and living habits and live a better life.

Diabetes can be prevented and controlled. It is a metabolic disease and hence, eating right, maintaining normal body weight, avoiding carbohydrates and living an active lifestyle can help you prevent and keep your blood sugar level in control.

If you are prone to diabetes or suffering from this illness, then it is high time to consume these herbs on a daily basis. Some of the best herbs and foods for diabetes prevention and control include fenugreek seeds, aloe vera, turmeric, cinnamon etc.

Apart from eating some of these herbs and foods, you should go on morning walk and do regular workout.

Are you taking any of these herbs?